There has been a secret art war between Fallout: Between Good and Evil and Mutants Rising for some time, but it looks like Killap is going to win: .Pixote. has spent "approximately 1000+ hours throughout 2009 laboring over [his] project of love", and has made "close to 1000 new [pieces] of artwork", for the Restoration Project. The vanilla and custom area maps have apparently been pimped, and FO2 will be a fresh gaming experience again.

I can't wait to rip apart the data folder :) and play the game of course.

Continuum is going public with his new love of talking head creation. He appears to be making Sulik's sister. He recently made an ubber TH for us at MR, and I hope more people will come out of the wood work to create Moar TH.

.Pixote. also introduced us to his/her new critter in the works:

There is allot of movement in the new critter area of modding. baaelSiljan is doing some interesting things over at the FOnline: 2238 forums he is getting close to making classic FO critters in 3D so we will be able to increase the amount of critters in game with a little more ease. 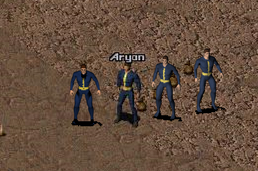 x'il is making some more interesting critters as usual as well.

I mentioned this project before in a previous blog. It is a Russian Van Buren FO2 project that I am following closely. They have granted me access to their development forums, so I can say with some confidence we should be seeing some kind of release from these guys. There is allot of progress going on behind the scenes. I need to start a Fallhope page when I get a chance.

A Russian project was recently announced to remake Fallout 2 in Fallout 3. Interestingly they are basing it around the Russian version of the MIB88 Megamod 2.34 I am not a FO3 modder so I am not sure how much work would be involved copying and pasting the English text into the GECK, so we could play it.

It is early days anyway. There is nothing to see on their website as of yet, but I will keep you updated of anything major. Check out Fallout 3 Mod the FO1 remake as well, if you are interested in this.

The Gallery which currently only has source material from other mods displayed.

Dialogue Training Continued is a document I am putting together for the new writers at MR. If you have any suggestions please post them in the talk page of the tutorial. This is your chance to directly influence the game design of FO2 mods. Which reminds me I need to update it with some new stuff.