Mad Max mods for Fallout 4! Since Fallout's inception, FO has taken its inspiration from the Mad Max franchise as seen by a man and his dog, and the Road Leathers that he has worn ever since Fallout 1. The following Fallout 4 mods, available on PC, will immerse yourself in the world of Mad Max. Reserve at least 25 plugins worth of PC Mods for the world of Mad Max.

Dog is now available in Dogmeat aka Pirate mod! You can either replace Dogmeat, or have Dog as a standalone companion. There are two available files for manual download depending on your preference.

Rideable Commonwealth vehicles can now complete your Mad Max experience! All I'm asking is for someone to mod Mad Max's INTERCEPTOR and THEN we are good to go!

Take you and Dog for a drive in a Semi Truck that you think could be safe for transporting fuel or water... or sand.

Now there are Enemy Vehicles to push over Wastelanders!

Get Lord Humungus hockey mask available in the Hockey Masks mod and his Black Leather Armor with Tactical Tiddy Harness - BT. Make Lord Humungus with NPC Raid Spawner by spawning 1 Raider follower. Use the Looks Menu option in Danger Zone settings to make body improvements to Lord Humungus, such as the Super Hero Bodies preset. You can even enlarge him to make him 7 foot tall in the Danger Zone settings. Setup Lord Humungus and his gang at a settlement. Give him Idle Animation for Muscular Male. After you are satisfied with having built a Humungus settlement, then initiate Hostile Workshops by SKK to turn the settlement HOSTILE.

Lord Humungus weapon of choice is the scoped .44 Magnum. Have a browse through NImrout 44 Magnum Expansion Pack.

You could also create Wez lookalikes with Lots More Male Hairstyles mod. Wez' weapon of choice is the crossbow. Check out Crossbows of the Commonwealth.

Play out Thunderdome by including the Vox Orbis Dome of Thunder in your Mad Max adventure! Two men enter! One man leaves! Make sure you surround the dome with lots of settlers. Use animation mats around the Dome for settlers to use. 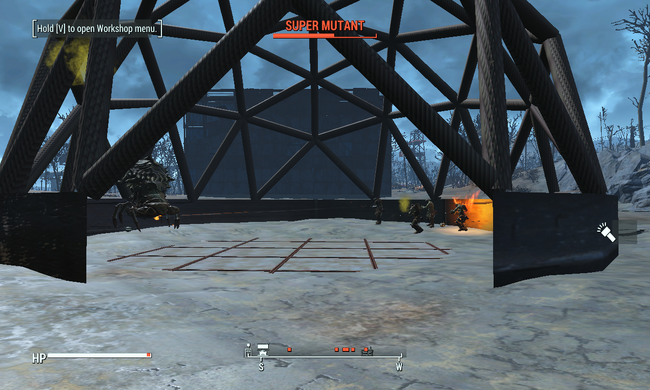 What's love got to do with it, when you can drive a train settlement? You MUST get the Driveable Train Settlement (Comes with a Patch)!

Include Driveable Motorcycles into your Mad Max experience!

The setting of the Mad Max universe is predominantly in desert conditions, notably in Thunderdome. Take advantage of the New Vegas Resurrection - A Vibrant Desert mod! Also include Desert-like Weather Chances for chance of dust storms.

WALKER! Make a settlement out of airplane parts.

Warboy Face Preset is available as a Fallout 4 mod. This is exceptional because it can be applied to any NPC that you recruit as a follower. Install NPC Raid Spawner and Looks Menu. Construct the Danger Zone terminal to spawn a gang of Raider followers at a designated settlement. Change their appearances to look like War Boys.

After making a settlement of War Boys, change the settlement to HOSTILE with Hostile Workshops by SKK. Don't forget to add Driveable Motorcycles and any Enemy Vehicles you may have acquired.